How to Make a Tennis Court Sub-base

Tennis court sub-base construction requires a specific and good-quality installation process. The crushed stone base underneath the artificial grass TennisKit is about 30 cm thick and installed in different layers.

On principle, the sub-base is similar to the structure used for building roads. Therefore, if you don’t want to do the work as DIY, but want to have the best sub-base for artificial grass, then TennisKit24 recommends finding a proper construction company. The best solution is a company experienced in road construction in your area.

The tennis court sub-base construction consists of the following 6 important steps to pay attention to:

First, remove the soil and other unstable ground down to the subsoil (sand, gravel).

After that, plane the natural subsoil level and tilt it slightly along the edges (light roof shape). Finally tighten with a specific roller – preferably an at least 2.5 ton ground roller if needed.

If the layer of stripped soil and unstable ground is thicker than 20 cm then you need to install backfill with sand or crushed stone in about 10 cm. The surface of the court must stay about 5 cm above the surrounding ground. So the rainwater is not getting stuck in the top surface layer of the sub-base. Level and tighten the backfill with a roller across the entire layer.

Build the drainage underneath the court if the location is known for problems with rainwater and excessive moisture or the court is lower than the surrounding area. Install the drainage preferably around the perimeter as well as 3-4 drains across the court itself.

Please follow the generally accepted standards when installing drainage. The recommended depth of drainage is approximately 50-60 cm. This ensures that the rainwater reaches drainage pipes quickly and the court dries fast. 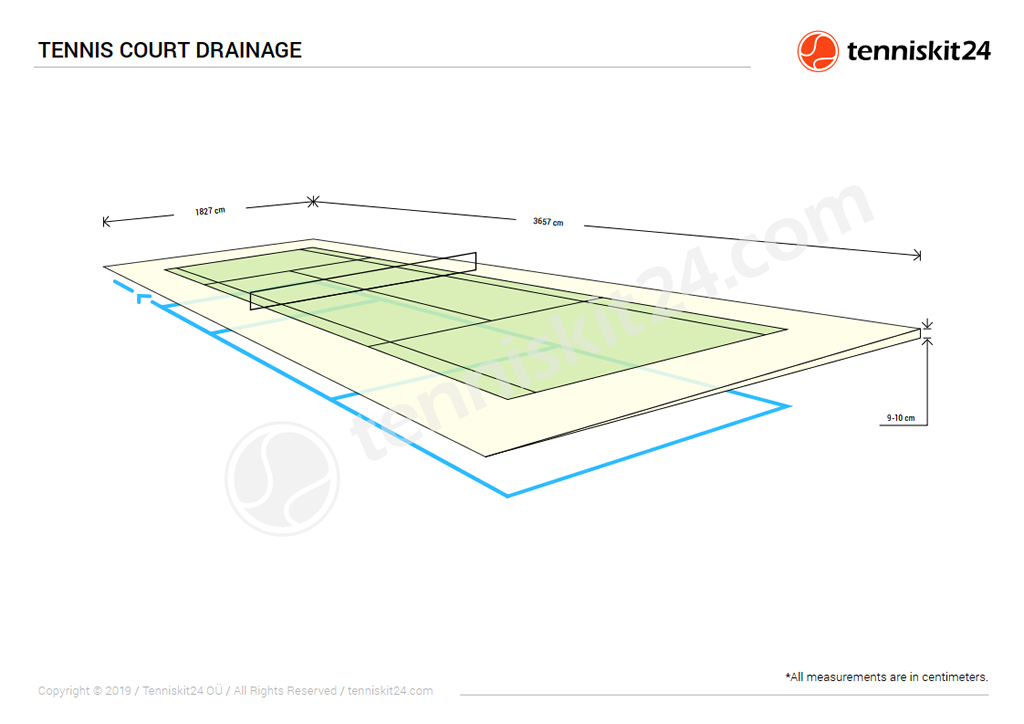 If the moisture levels are normal or closer to dry, then there is no direct need for drainage. However, TennisKit24 recommends building a slope in one direction approximately 10 cm per 18.27 m. Consider this slope when installing backfill and form it with the same slope. 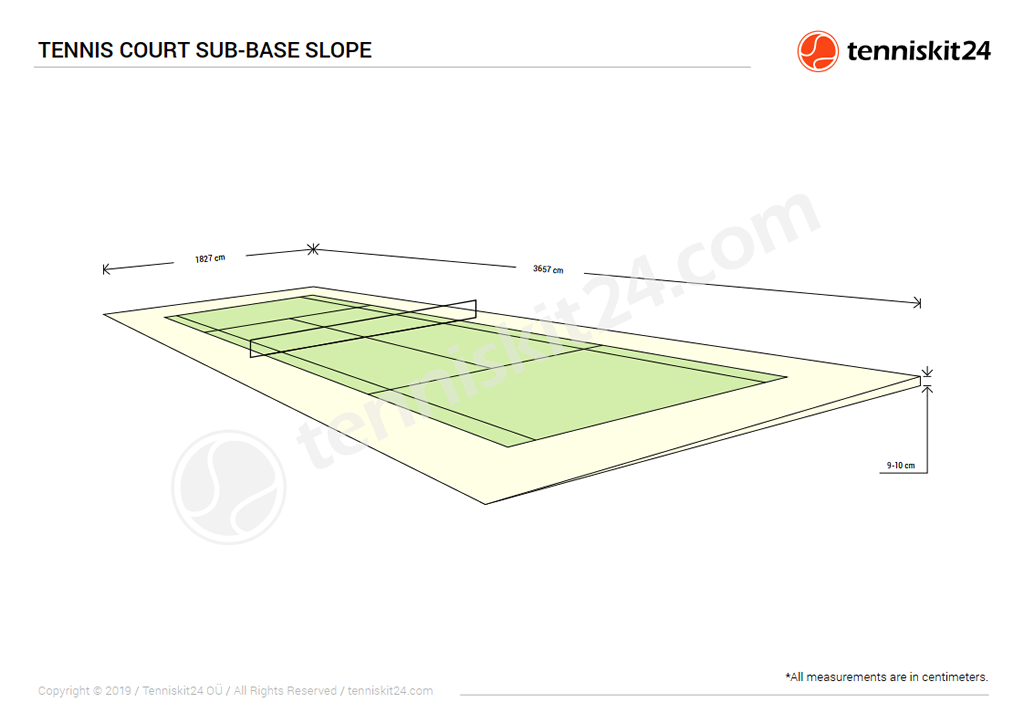 Once you have completed the backfill, then the filled surface must be tightened with a roller again.

Level the entire base layer and tighten properly with a roller. The minimum weight of the roller is 2.5 tons, recommended is 7 tons.

Step 4 – Installation of the Curbstone Around the Perimeter

Install the curbstones around the perimeter of the tennis court after tightening the load-bearing layer of crushed stone. The recommended size of the curbstone is 80x200x1000 mm. Install and fix the curbstones with concrete to avoid shifting during the later sub-base layers tightening process.

The measurements of the area bordered by curbstone are 18.27×36.57 meters. This area equals the surface later to be covered with artificial grass. Therefore, check the diagonals of the court carefully during installation – the diagonals must be equal length.

Also, consider the slope of the court when installing the curbstone. This will guarantee the best sub-base for artificial grass. If the backfill and the base layer installations are correct, then the upper edge of the curbstone remains 9-10 cm above the base layer.

For comfort, TennisKit24 recommends picking a 3-4 meters spot where the material for the next layers of sub-base can be delivered directly onto the sub-base. Leave the curbstone uninstalled at that spot. Install this part of the curbstone when there is no more need to bring sub-base materials to the court.

The middle wedging layer prevents the next layer (if the upper layer is made of grit) from getting washed into the coarse crushed stone with rainwater.

Start the top layer installation after the wedging layer is tightened and complete. There are two options:

Grit as a Top Layer

Grit is a byproduct of manufacturing crushed stone. The best option is granite grit with a fraction of 0-8 mm. Limestone grit (ash) does not work. It will clump over time and will not let rainwater through. Gravel grit containing clay is also unsuitable, this will not drain enough rainwater, too.

Install the grit layer level with the upper surface of the curbstone.

We do not recommend building a “bowl” where the grit layer is lower than the curbstone. This makes it harder to drain rainwater and the grit layer ends up soft due to moisture. 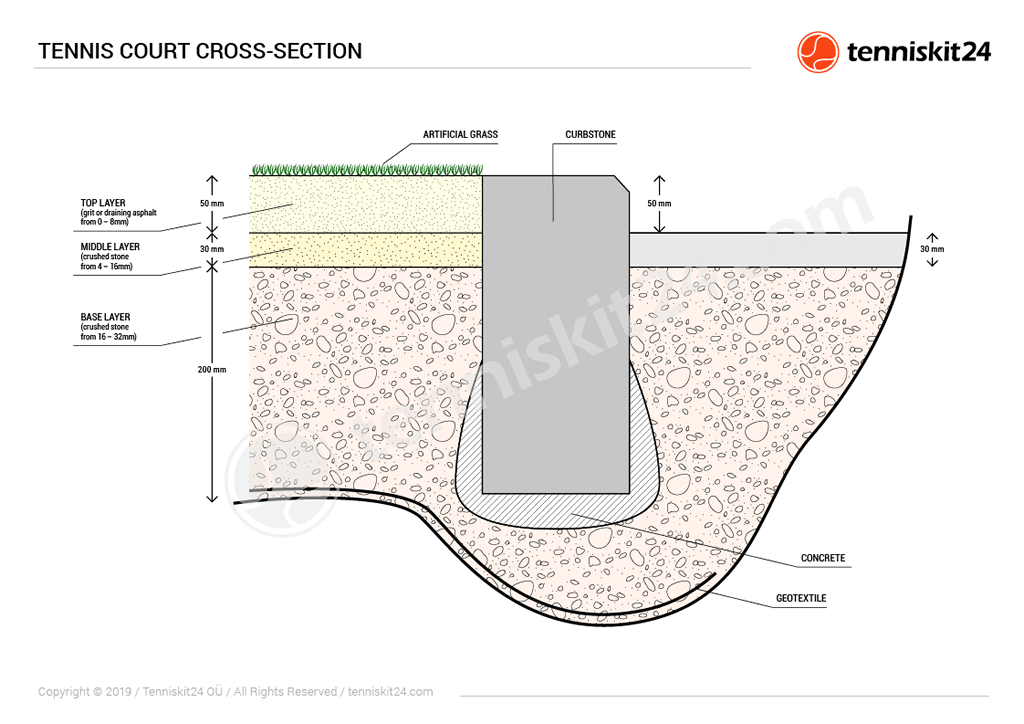 The acceptable thickness of the grit layer is 5-6 cm. Thinner layer is not a good choice as it is difficult to get a stable surface. The parts of crushed stone with a bigger fraction in the lower layers tend to break through the grit layer in case of the thinner layer. Therefore, later the installation of the artificial grass may be complicated.

The easiest way to achieve a good result is to use a specialized laser-equipped spreader.

If you don’t have a device like this, then install the grit layer by hand as instructed below.

Installing a Grit Layer Without a Laser-Equipped Spreader

The easiest way to build a grit layer is in two layers. As a first step install the grit, level all the material and finally tighten it with a roller. Use the pipes to install this layer. Be careful and tighten the pipe locations particularly carefully. Otherwise, the pipe locations remain lower after the pipes are removed. After the grit layer is installed, check the levelness of the sub-base with strings and bars. 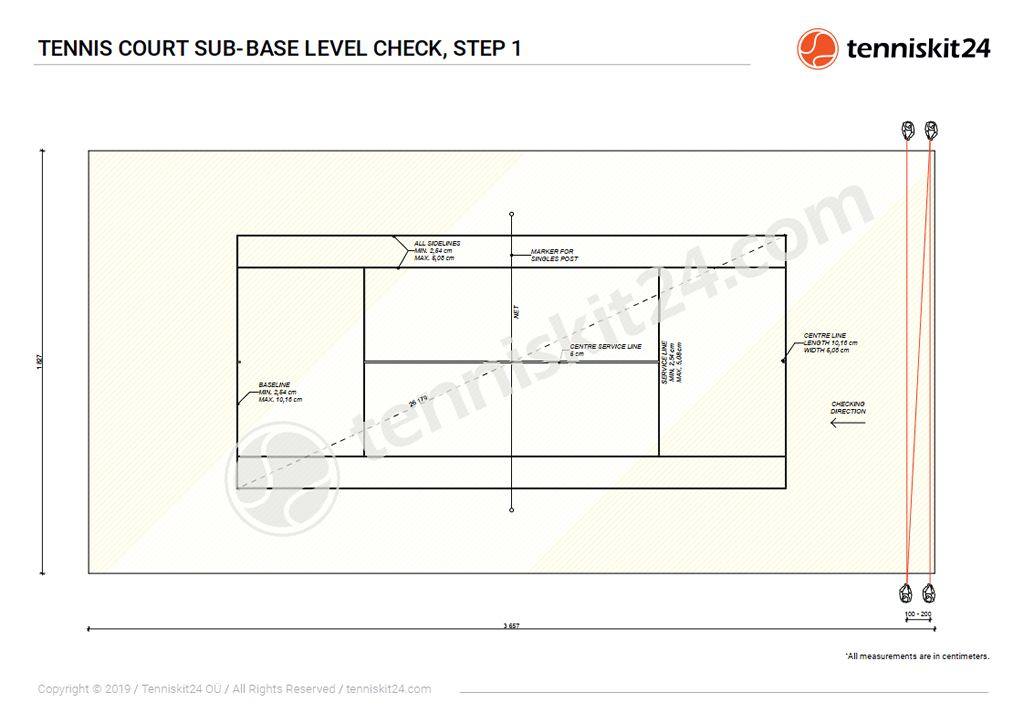 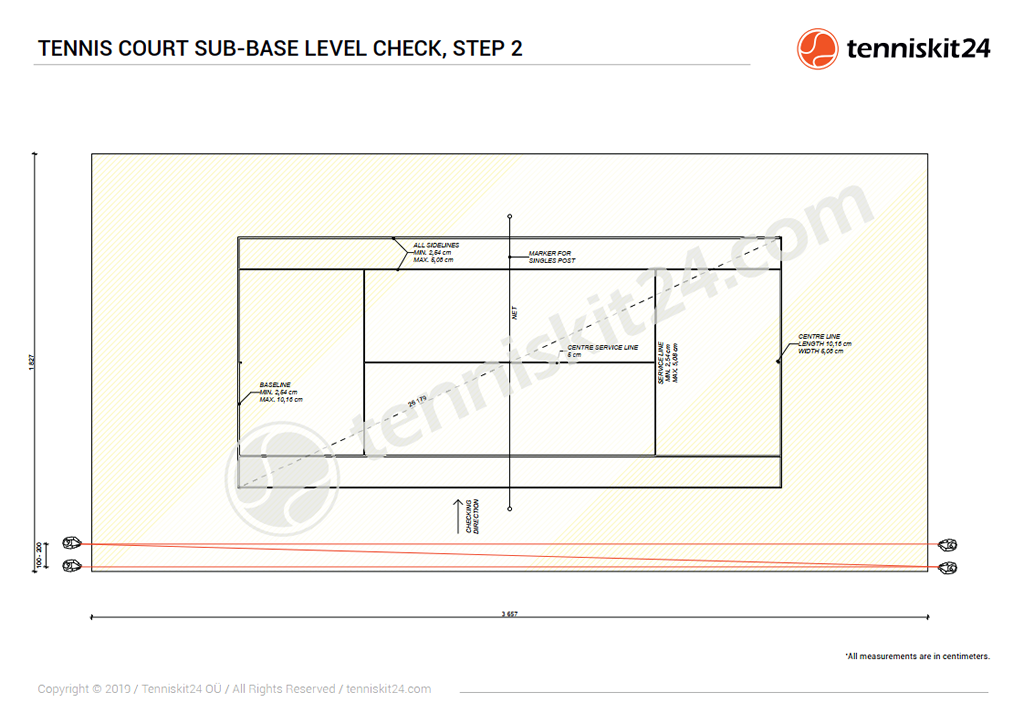 Mark the lower and higher areas and then add or remove grit accordingly. After this, tighten the entire surface again with a roller.

A flat and stable, steadily hardened surface is a very good result. Measure the level with a 3 meter bar. TennisKit24 recommends a variation of 5-6 mm at most.

The more stable and level the sub-base is, the higher the court quality will be. The stability and levelness are particularly important in tennis court sub-base construction since the installed artificial grass takes the form of the sub-base and does not cover up any defects. Check the playing area carefully because imperfections are particularly visible under the white lines. 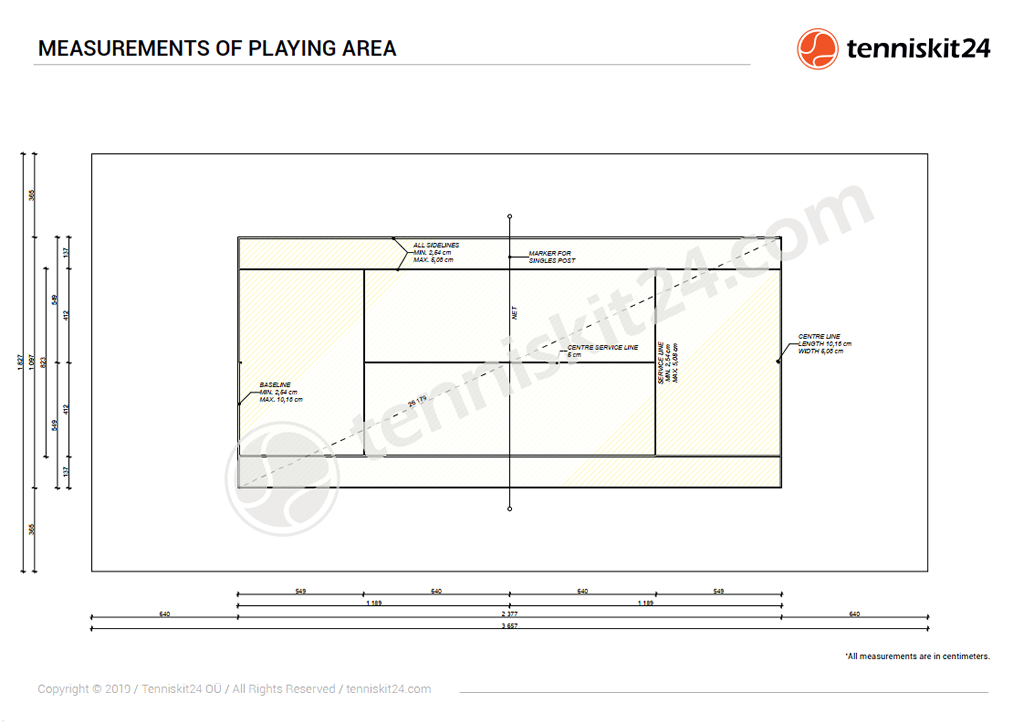 The grit as a top layer material is relatively cheap material, and the court surface is later very foot-friendly, but it does take longer to install.

Tighten the top layer with the roller and double drum vibratory roller is very suitable for this job. You can also use a lighter weight walk behind roller.

Asphalt as a Top Layer

The second option for tennis court sub-base construction is the draining asphalt as the top layer .

With draining asphalt, the entire tennis court sub-base construction has the same structure as with grit. The only difference is the final 5 cm layer.

If you go for drainage asphalt, you need to order the asphalt layer installation from an experienced road construction company.

The recommended thickness of the asphalt layer is 5-6 cm, and the asphalt must be water draining.

The advantage of this option is the completion speed. The asphalt layer is installed fast, usually with a single day, with a specific machine.